CRICKET: In match 6 of the Jones Lang LaSalle (JLL) cricket league, Thalang (TCT) were pitted against a fired-up Patong who were searching for their first victory of the season at the Alan Cooke Ground (ACG) last Sunday (January 17). 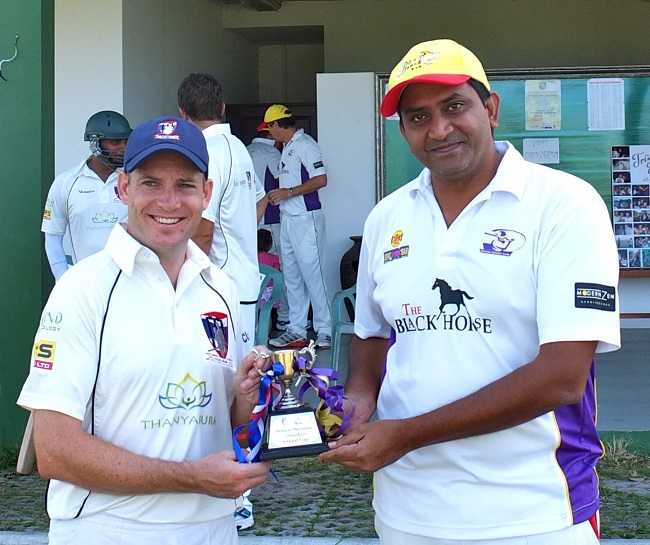 This was more than just another league game, with both sides competing for the inaugural Tristen Sheridan cup in memory of exceptionally talented PCG cricketer and mutual friend who tragically passed away last year.

In a highly competitive and closely fought match, TCT posted a total of 191-8 from their 35 overs with the Patong just falling short of the target with 187-9 from their innings.

Also making its debut was the Chris Hart memorial digital scoreboard which now enables spectators to keep up-to-date with the scores while sitting in the comfort of the clubhouse.

TCT won the toss and chose to bat first. Roshan Jayasuriya (11) chanced his arm early on in the innings hitting 2 boundaries until he was caught by the Thai youngster Pao on the fence in just the 3rd over. In the next over, Simon Wetherell (0) was bowled by Dave Watson as Patong took the ascendency early on with good, tight bowling. Bill Stahmer (34) and Craig Murphy (20) then joined forces to steady the innings during the next 10 overs until Murphy fell in the 15th over with the score on 53-3. With TCT’s run rate under 4 an over, it took a great innings from Neill Culpan (68 from 61 balls) to bring the game back in balance. In his first game of the season, Neill scored freely, hitting 2 towering sixes as he partnered with Ian Henry (24 not out) to guide TCT to a competitive total of 191-8 from 35 overs.

After the lunch break Patong set about the run chase in a very positive manner. Mike Khan (19) and Imtiyaz Mustaq (35) had the TCT bowler’s measure, until Khan’s lofted off drive from Culpan failed to clear the fast moving Gary Lane at mid-off. Thereafter, a batting collapse ensued, with Patong, who were 46-1 in the 8th over, were struggling at 74-5 in the 12th over as Neill Culpan (4 for 28) showed his all-round abilities. Neill bowled Mushtaq, had Paddy Morton adjudged LBW two balls later and in his next over he had Thai batsman Pao, caught by Ian Henry at slip. However, a determined Dave Watson (51) was left to steady the Patong ship and with a little luck and some great support from Owen Pringle (14), the battle for the Tristen Sheridan cup was far from over.

At the start of the 30th over TCT's opening bowlers had finished their spells for the day and Patong were 143-7 and required just 49 runs to win. Watson hit back-to-back boundaries to bring up his 50, but attempted one big shot too many, when he was stumped by Simon Wetherell. Neil Quail (26 not out off 19 balls) never gave in for Patong despite carrying a hand injury and Patong reached the last over needing 12 runs for victory. However, Craig Murphy bowled a disciplined last over for TCT and Patong fell 4 runs short to finish at 9-187.

This Sunday (January 26) sees a clash between the only two undefeated teams so far, when title-holders Laguna take on ICC. Play starts at 10 am.