PHUKET: Lt Gen Pornsak Poonsawat, Commander of the Fourth Army Region base in Nakhon Sri Thammarat, which is the leading Army base in all of Southern Thailand, in Phuket today (Apr 3) warned that “action” would be taken against any persons caught breaking the national curfew. 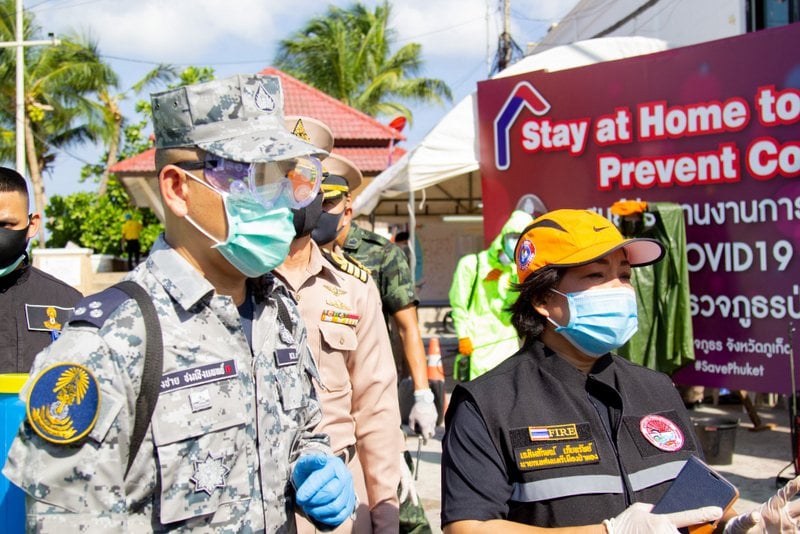 Lt Gen Pornsak was in Patong today to preside over the official opening ceremony to clean the Bangla Rd nightlife area and other communities in Patong as part of the nationwide “Big Cleaning Day” activities being held across the country in the hope of slowing the spread of the COVID-19 coronavirus.

“The government is concerned about the COVID-19 situation in Phuket. We don’t want to be like Italy or other cities. Phuket now had 100 people confirmed as infected. In all of Southern Thailand, Phuket is considered to have a very high number of confirmed cases, so Prime Minister General Prayut Chan-o-cha is very concerned [about this],” Lt Gen Pornsak said.

“He has assigned the 4th Army Region to help the Phuket Governor. Importantly, Phuket people must help each other, and come out to clean the front of their houses,” he added.

Lt Gen Pornsak said that the national curfew from 10pm to 4am each night will be strictly enforced.

“The government has issued a curfew, which will be clearly enforced by law. We must take action against anyone who violates the curfew, otherwise we can’t stop the numbers [from rising].

“Recently a small secret party was discovered [in Patong, see here], and yesterday there were tourists involved in an accident in Phuket which raised concerns about COVID-19 [spreading], resulting in the need to detain another 130 people.

“If people tell the truth [about their history and who they have been in close contact with], it will greatly help medical personnel,” he said.

Army Region 4 soldiers and military personnel will now be assisting efforts by officials in Phuket to police and enforce policies, including the curfew and other regulations irdered under the Emergency Decree, Lt Gen Pornsak said.

Region 8 Police will also bolster the ranks on the streets in support of enforcing the policies and regulations in Patong and other areas, he added.

Vice Admiral Cherngchai said Navy Navy personnel were already assisting police officers and other officials at checkpoints across the island.

“Of the situation escalates to Stage 3, the military will be there to provide safety and help the people,” he said.

Phuket Governor Phakaphong said, “Phuket, especially Patong, is an important source of the disease spreading. Most of the people at risk are in Soi Bangla.”

Six venues on Bangla Rd in particular were of concern, he added.

“We already have a list [of persons concerned]. It is necessary to close the Patong area for the benefit of the disease investigation and these people must be taken into quarantine and placed under observation for 14 days,” he said.

The Ministry of Public Health has dedicated a team to check people who present themselves at the Sleep With Me hotel in Patong, which is now serving as an accommodation centre for people under observation for the virus, he added.

A 2 hr downpoor, and half of Phuket under water. One can't make it up. Many times last few mon...(Read More)

Please Kurt,read the article again ! It's not about tourists. ...(Read More)

Let's dont rush into things too early. I would like to see the use of airships and hot air ballo...(Read More)