PHUKET: Phuket did suffer one death during the “Seven Days of Danger” road-safety campaign for the New Year holidays, The Phuket News has confirmed, but the death will not be added to the official tally until the end of the month.

tourismtransportdeathaccidentspatong
By The Phuket News The DDPM report on the final day of the campaign reported zeros deaths on Phuket roads from Dec 27 to Jan 2. Image: DDPM 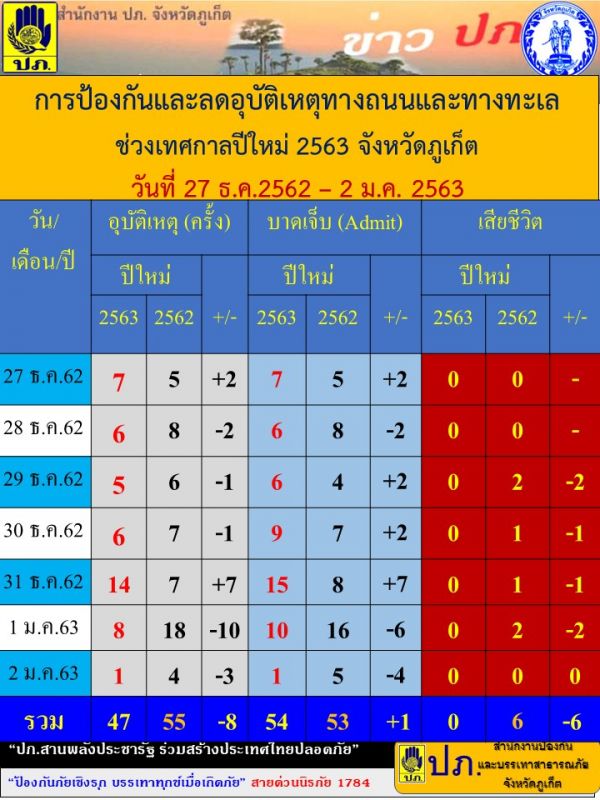 The DDPM report on the final day of the campaign reported zeros deaths on Phuket roads from Dec 27 to Jan 2. Image: DDPM

Ms Thanaporn was included in the DDPM report for Jan 1 as injured: Image: DDPM The news follows the Phuket office of the Department of Disaster Prevention and Mitigation (DDPM-Phuket) reporting last Friday (Jan 3) that Phuket concluded the Seven Days campaign, from Dec 27 to Jan 2, with 53 people injured in 47 accidents – but with zero deaths. (See story here.)

On receiving that report, The Phuket News asked for confirmation from the administrators of Thai Road Safety Committee (ThaiRSC) official website to explain why they had recorded one death on New Year’s Day.

The answer was simple: a woman had died in a motorbike accident in Patong at 3am that day.

One of the website administrators, who asked not to be named, said that ThaiRSC had received confirmation directly from Vachira Phuket Hospital – the main government hospital on the island – that Thanaphorn Masalee, 43, had died from injuries sustained in a road accident on Phrabaramee Rd.

“The hospital reported her death at about 3am on Jan 1,” the administrator said.

However, DDPM-Phuket Chief Prapan Kanprasang on Wednesday (Jan 8) maintained that he had no knowledge of any deaths from road accidents in Phuket on Jan 1 – despite The Phuket News informing him of the ThaiRSC report last Friday (Jan 3).

“I have no idea who died on that day,” he said.

“Our reports still confirm that the number of deaths [for the Seven Days campaign] is zero,” Mr Prapan repeated.

“I have not yet had any updates from the hospitals on the number deaths and injuries from road accidents. I will not get that until the second part of safety campaign is over.” Mr Prapan explained.

“The seven days from Dec 27 to Jan 2 is only the first part of the campaign. After that, from Jan 3 to Feb 1, is the second, or ‘following up’ part. Then we will know the updated information,” he said.

For reasons unexplained, the accident that resulted in Ms Thanaphorn's death was recorded in the daily DDPM report for Jan 1 presented to Phuket Vice Governor Supoj Rotreuang Na Nongkhai at Phuket Provincial Hall on Jan 2 - but her death was not.

The daily report noted that Ms Thanaphorn was a passenger on a motorbike bring driven by Kingfa Yoiyam, 20, when the motorbike collided with another motorbike.

Both Kingfa and Thanaphorn were drunk, and both were not wearing helmets, the report said.

Ms Thanaphorn suffered serious head injuries and was reported as unconscious at the scene. She was taken to Patong Hospital, then later transferred to Vachira Phuket Hospital, where she died. (See report here.)

“I have already sent a request to the Phuket Provincial Health Office [PPHO] for an update to the statistics. So now it is up to the PPHO to collect the information about the people who were taken to hospital.

“They [the PPHO] can submit their report about the number of deaths during the campaign anytime within 30 days after Jan 2,” Mr Prapan said.

Meanwhile, one PPHO officer involved in providing the reports who asked not to be named told The Phuket News, “These reports must wait for the hospitals, so we have to wait for 30 days. Then we will report back to the DDPM. It is DDPM’s responsibility to publish this information.”