PHUKET: A team of seven from China working as wedding photographers have been arrested at Kata Noi Beach and the tourist-popular Kathu Temple for illegally working in Thailand. 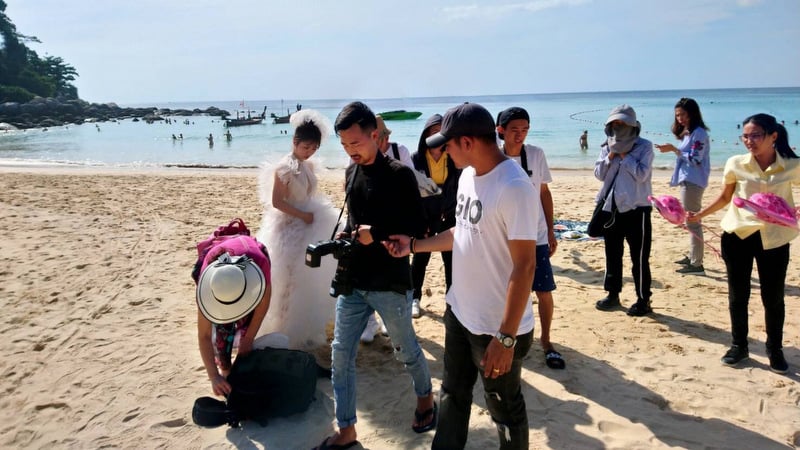 The arrests were the result of a joint effort by Phuket Immigration police officers along with Phuket Tourist Police and officials from the Phuket Provincial Employment Office, reported Phuket Immigration Chief Col Kathathorn Kumthieng.

The task force split into two teams, with one team making arrests at Wat Kathu and the other team catching the “pre-wedding” photographers in action on Kata Noi Beach yesterday (Jan 9).

All seven had entered Thailand on tourist visas, but were hired to work as a wedding photography team under an employment contract from China, Col Kathathorn explained.

“Each person had a clearly assigned duty as to who was the photographer, who was the coordinator and even who was the makeup artist,” he said.

The team were caught with an itinerary showing that they were to carry out photo and video shoots at various tourist attractions across Phuket, including Soi Rommanee and Thalang Rd in Phuket Town, as well as at Kamala Beach, Kathu Temple, Chalong Temple, Promthep Cape, Surin Beach and Nai Yang Beach, Col Kathathorn noted.

All seven were taken to the police station nearest to where they were arrested – either Karon Police Station or Kathu Police Station – and charged with working illegally in the country and for breach of the conditions of their permits-to-stay, Col Kathathorn confirmed.