The bridge in front of the Wyndham resort on the Kamala – Patong road is broken on the surface but it is still stable. Photo: Hanuman Chasamorn 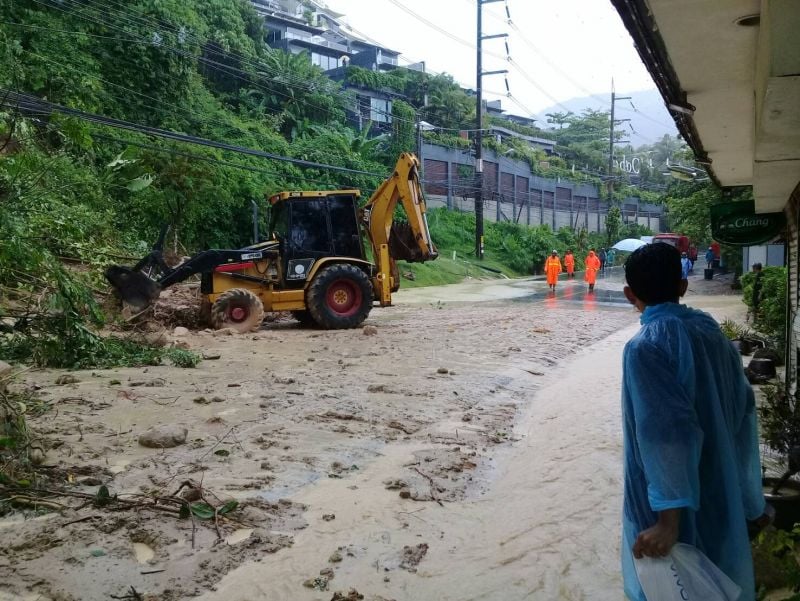 Governor Phakaphong ordered relevant government officials are quickly check the damage caused and provide assistance to any persons affected by the floods.

Officials from the Patong Municipal Department of Disaster Prevention and Mitigation, Patong Municipality and the Kamala Sub-district Administrative Organisation, or OrBorTor, and related departments took machinery to repair sections of route 4233 where landslides had occurred.

Officials have confirmed that the road is now open to all traffic but motorists are advised to drive with cation.

Chief of the Department of Disaster Prevention and Mitigation Phuket office (DDPM) Prapan Kanprasang told The Phuket News this afternoon, “There were many points which suffered from flooding and landslides. However, I am not yet able to give an exact figure of how many locations were affected. We are still checking now.

“We know that there are some landslides near the U Zenmaya Phuket reort, and area of 15 sq m. I have ordered hotel staff to move any guests that could be affected by this as there is a risk of the land sliding further.

“Hotel guests in danger have been moved to another part of the resort already,” he said.

“There are also a further three points in Kamala which need monitoring as they are still at risk of landslide and flooding.

“The bridge in front of the Wyndham resort on the Kamala – Patong road is broken on the surface but it is still stable. Motorbikes and cars can still pass but buses and big vehicles are not allowed to use this road.

“I have assigned the Phuket Provincial Public Works Office to check and figure out this part the bridge,” he added.