FOOTBALL: Phuket FC took another step toward relegation with a 2-0 away loss at Suphanburi FC, who currently sit near the top of the Division 1 table. 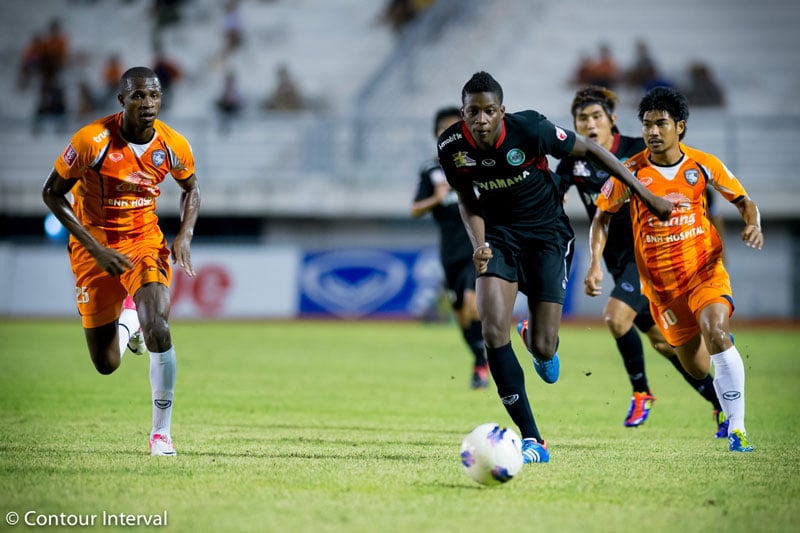 Suphanburi are one step closer to a promotion to the Thai Premier League in 2013 and looked to continue their unbeaten streak against southern teams. Phuket was missing a few key players in Wutthipong and Roland Vargas.

After the referee missed a possible handball in the first half by Suphanburi midfielder Yodrak,the youngster took advantage of hesitant Phuket play and weaved through the defence towards the goal line before he fired a shot past Islander keeper Kampol.

Trailing, Phuket’s plays began getting chippy. Marcio Santos at midfield committed a foul against former Phuket player Diarra Ali. Coach Anurak pulled the Brazilian near the end of the first half in favor of Watcharapong, who had survived a car crash just the week before.

The closest opportunity Phuket had was a shot by Narakorn that hit the post early in the second half. Shortly after that, the home side stretched their lead to 2-0 after Suphanburi’s Paisal headed the ball right through Kampol’s hands into the back of the net. The War Elephants almost netted a third goal when a shot hit the goal post.

Phuket has yet to gain a point under their new coach.

Phuket is currently 15th in the standings with 31 points and will take on 12th place Khon Kaen FC on Wednesday (October 10) at Surakul Stadium with a 6:30 pm kick-off.