PHUKET: The weather was set fair for this year’s 21st Aussie Bar Phuket International Rugby 10s hosted by the Thanyapura Sports Club amid dire storm warnings which thankfully failed to materialise, contributing to some tremendous rugby being played across all competitions. 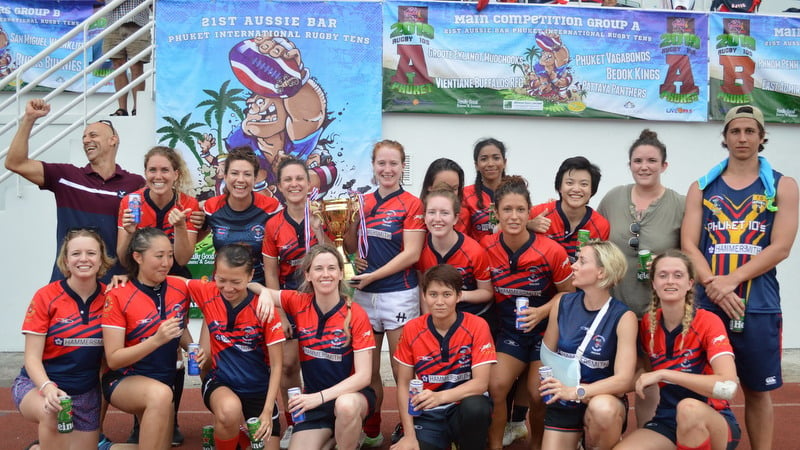 As is traditional the weekend kicked off on Friday, May 24 with the Athena Siam Coffin Dodgers over 35s and the One Foot in the Grave over 45s. The Tournament kicked off with the Stray Cats from Australia taking on a youthful Hong Kong Bulls side prevailing 15-5. After some sterling performances, the Cats would go on to contest the Plate final on Sunday against a very good San Miguel Wrinkleys side from Singapore who put them down 29-5.

The KL Tigers, back in force after a couple of years, started slow, falling to the Yangon Dragons 26-0 before picking up steam and defeating the Bulls and Stray Cats to earn a spot in the cup semi-final eventually going down 10-0 to the Phuket Viagrabonds.

Old friends the Old Bangkok Bangers were another team on a roll winning two of their games to make the Cup semi-final beating a spirited Yangon Low Flying Dragons outfit 19-7 to book a final with their old nemesis the Phuket Viagrabonds.

The Sunday final was a hard fought game in front of a large crowd with the result in the balance until the Viagrabonds scored a second try on full time to clinch it 10-0 becoming the Athena Siam Coffin Dodgers Champions and winning back the Weasel cup from the Bangers.

You would have thought that the One Foot in the Grave overs 45s would have been a more sedate affair but far from it. With old rivalries rekindled and new battles to be fought, these old warriors were not settling for a back seat. The Asian Japanese Dragons took on the Moorabbin Rams who fielded some players who have played in every Phuket Tour which was a fantastic achievement.

Against a sprightly Japanese side, they were always second best going down 14-0.

The Dragons went on to complete a clean sweep of the group games to make the final. The Rams bounced back against the Cottesloe Pirates winning 17-12. The Pirates playing good rugby, made mistakes at crucial times and lost their remaining games 17-0 against the KL Tigers and the dragons 10-0 to end the tournament winless.

The Tigers excelled in the warmer afternoon games as limbs and bones eventually warmed up, making the final with wins over the Rams and the Pirates in the group stages and taking out the Rams in the semi-final 10-0.

The Sunday final was a sparkling affair with the quicker dragons buzzing around the park and the Tigers using their bulk and forward prowess to good effect. In the end, though the humidity and heat took its toll on the Tigers and the Asian Japanese Dragons were crowned Over 45s Champions, claiming the ACF Cup with a 17-0 victory.

Saturday saw the start of the Open Tournaments kicked off with the expanded ladies division. The form team from day one was the Emirates Firebirds who topped their group from Phnom Penh Sparkling Rahus and the Vientiane Buffalettes with two wins and a draw.

In Group B defending champions the Bangers Belles were playing second fiddle to Wahine RFC from Japan who won all their games finishing second in the group ahead of KL Tigers Ladies and Shenzhen Dragons.

Sunday’s Knockouts saw the Firebirds getting a ‘walkover’ the Dragons whilst the Belles put in a fine performance to take out the Buffalettes 17-0 to set up a semi showdown with the Firebirds.

The Rahus booked their place in the semi with a fine 10-5 win over the Tigers. Wahine would be their opponents after getting a bye. The Firebirds looked a bit lacklustre in their semi-final and the Belles were coming in hot and took the game with a surprising 27-0 score. They would play the Rahus after their win over Wahine.

The final was an all out no holds barred affair with the Rahus showing some exceptional skill, but in the end, the Belles experience and big game knowhow won the day as they were crowned Ladies Champions for the second year running with a score of 12-0. Fantastic to see so many ladies teams this year and the competition was a big step up from last year.

The eagerly awaited men’s tournament kicked off with hometown defending champions the Phuket Vagabonds taking on the Vientiane Buffalos in Group A, beating them and going on to win all their group games against the Groote Eylandt Mudchooks from Australia, Bedok Kings from Singapore and the Pattaya Panthers without losing a point to make the cup quarterfinals against the US boys the Yomitan Beach Boys who came through as best third teams from Group B comprising East Admiralty, PAC Barbarians, Phnom Penh Sparkling Rahus and the local Thai lads the Old Man Mix.

Group C was topped by the SA Scorpions from South Africa followed by the Phuket Vagabond Rabittohs, KL Tigers and The Bangkok Bangers.

The quarterfinals were all tough games with the Vagabonds scraping through to the cup semi-final when the Yomitan Beach Boys’ player miscued a kick in the dying seconds to allow the Vagabonds to score the winning try.

The final saw the Vagabonds starting strong but they faded in the second half to a very strong PAC Barbarians side coached by rugby legend Justin Barrett and went on to lose 17-0.

Special Thanks to the Aussie Bar and Athena Siam Limited for all their support over the years.

The Asia Center Foundation www.asiacenterfoundation.org with whom we have worked with since the Tsunami had their children put on a special production to show their appreciation for all the help they have received from the rugby community over the years. The ACF were presented with cheques from the Bangers on Bikes (https://www.facebook.com/Bangers-on-the-Bike-Charity-Ride-132102380188433/) who do a 1,000km cycle annually and other donations from the KL Tigers along with other teams and supporters to ensure that the 113 children currently in the scholarship program will continue to receive the education they deserve.