PHUKET: The Phuket branch of the Internal Security Operations Command (Isoc), which serves as the political arm of the Thai military, today (July 31) stepped in and formally became involved in improving tour boat safety in Phuket.

disastersdeathtourismmarinemilitaryChinesetransport
By The Phuket News 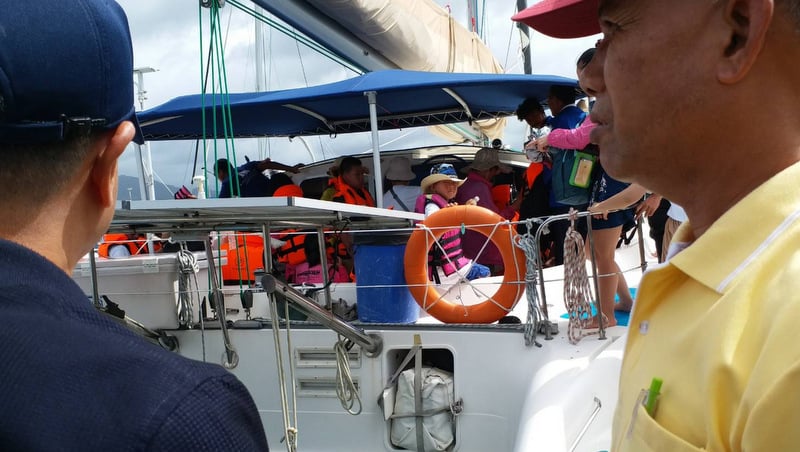 At a meeting at Phuket Provincial Hall chaired by Phuket Governor Norraphat Plodthong, it was explained that Isoc will set up guidelines for action to organise tourism businesses in Phuket “for stability of the country”.

Present were R/Adm Boworn Mattawanukul, Deputy Director of the Isoc branch in Phuket, as well as Phuket Vice Governor Snith Sriwihok, Phuket Provincial Police Commander Maj Gen Teeraphol Thipjaroen, the heads of every relevant government agency in Phuket and representatives of tour businesses and operators of the major tour boat piers in Phuket.

Governor Norraphat explained, “The Phuket branch of Isoc has set guidelines for any businesses involved in tourism to follow for stability of the country.

“This is to control, correct, and rehabilitate the situation in Phuket and to ensure the safety and security of Phuket residents.

“It also provides a way for tour operators, tour guides, tour operators and tourists to ensure confidence and results in the campaign, and to develop and supervise tour and travel businesses in Phuket,” he said.

After the announcement, the heads of relevant agencies and other people present were taken on an inspection of all major piers on the island, both government and private, that are used to provide boat trips for tourists.

During that inspection Governor Norraphat explained that 24 major tour boat piers in Phuket had been inspected by officials, who had been assigned into three teams in order to conduct the inspections quickly and thoroughly.

R/Adm Boworn and his team inspected the piers in Thalang, in the northern half of the island.

Phuket Provincial Office Chief Administrative Officer (Palad) Sakchai Kunanawatchaidej lead the team to inspect the piers within Muang District (Phuket Town, Chalong, Rawai, Kata and Karon), with the exception of the piers in the Tah Jeen Canal area in Rassada (north of Phuket Town), which includes the busy Rassada Pier, and which were left to Phuket Vice Governor Snith Sriwihok and his team to inspect.

“However, the inspections by the three teams found many piers that need to be improved,” Gov Norraphat said today.

He subsequently today ordered for every tour boat pier to have CCTV installed and to post signs to inform tourists of the marine safety guidelines, and for all tour boats to be checked to ensure the equipment on board and the crew meet safety regulations.

“From now on, every pier will have staff from the relevant agencies on hand to check the boats before allowing the boats to depart,” he said.

“The equipment inside boats and the equipment on board must be ready to use. The passengers must be checked and we must have some record to identify them by face, including information such as their names, nationalities, their place of accommodation and their destination.

“Tour guides must be checked in accordance with the law,” he added.

“This is to enhance the standard of tourism in Phuket, a world-class tourist attraction, as well as to create the security and confidence among tourists,” he said.