Hero behind the scenes - Interview with cave diver, Maksym Polejaka

Hero behind the scenes - Interview with cave diver, Maksym Polejaka

Speaking of Superman, you might think of a figure in cartoons or movies: working hard in a small cubicle like average Joe. Once he’s needed, he rushes out, rips off his working clothes, reveals his flying cape, charges into danger to save people’s lives. When crisis is resolved, Superman returns to his normal life. This is exactly what Maksym Polejaka did in July to save the football team in Tham Luang Nang Non Cave in Chiang Rai, except the cape part. 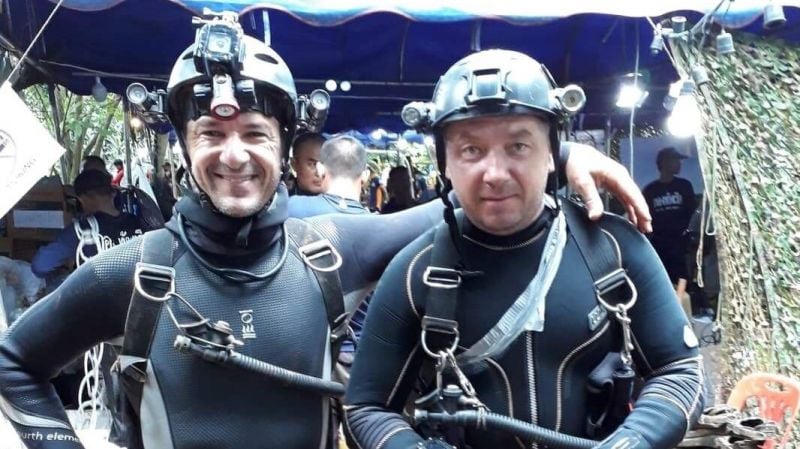 Ben and Maksym (right) deep in the cave system Maksym (right) with Ben (second left) with other divers Maksym (yellow tie) at celebration reception with the rescued children

Mario Puzo in The Godfather says, “Great man are not born great, they grow great.” After serving in the army for 12 years with military diving training, Maksym worked as a diving instructor in Maldives for four years, with more than 10,000 dives, and a deepest dive reaching 160 metres underwater.

Maksym fell in love with this wonderful island and moved to Phuket with his family seven years ago. He and Ben, his diving buddy, enhanced their skills, by exploring many caves in Phuket. When he ended his professional diving instructor career, he came to build boats in Dream Yacht Charter Thailand.

The quietness was interrupted when Maksym heard from the media that the Wild Boar football team went missing in the cave. He and his boss Joel Llas were perturbed. They discussed the new findings every day. On June 26, he received a phone call from Ben who had already been in Tham Luang supporting the Navy Seals. They discussed the bad situation briefly over the phone, when Ben declared, “Maksym, we must try.” “Yes. I am coming now,” was the response.

Joel fully supported Maksym, “With 23 years of diving experience, you can help them.” Without any delay, Maksym kissed goodbye his wife and two-year-old son and joined Ben for the search mission.

When Maksym, as a professional technical diver, saw the cave with his own eyes… it was bad. He recalled, “There were siphon effects, unpredictable inflows, outflow; the waterway was extremely complex, the current was so strong that no one could swim in it. There was no visibility as the water was full of mud, sand, small rocks, plastic bags, dead plants and other trash. The water was at a low temperature, and if that wasn’t enough, no lighting. In conclusion, it’s not acceptable for cave diving.”

Against all odds, Maksym and Ben decided to go, “It’s difficult and dangerous, but at least we must try. If we don’t try, nobody else will.”

Maksym and Ben served as consultants for Thai Navy Seals during the Rescue Phase II – Search Mission, providing professional technical diving skills. Since the water was impossible to swim, Maksym suggested lining ropes in the cave to ensure the divers could go farther to search and explore. He and Ben taught the Navy Seals how to fix ropes along the rocks or whatever they could find in the cave.

Because of the lack of visibility in the water, they also taught the Navy Seals how to use special touch language underwater to communicate with the dive buddies.

As the current was rapid everywhere in the cave, the rope laying procedure was extremely slow. They literally had to ‘climb’ in the water to move forward.
It took all of them five days to build the lifeline from the search chamber to one place 100 metres away from the chamber where the children were finally found.

Every time, Maksym walked to the cave entrance wearing an overall diving suit with professional diving air tanks. It took them about two hours to dive from the entrance to the search chamber. With half an hour rest and changing dive tanks and gear, they put on one more bag with 200m-long thick rope inside, another tool bag full of hammers and special nails. Then they jumped into the muddy water, dived at least another two hours farther inside to lay more ropes.

If you know how hard it is to walk in water with clothes on, little buoyancy and against strong water resistance, multiply that many times for their situation. They competed against the cold, pitch darkness, and heavy tanks and bags against the rapid currents. And worse still, they had to keep in mind the amount of air left in the tank for their safe return.

Another two hours back to the search chamber, a half-hour rest, disarm part of the equipment and two hours to get back to the entrance. That’s more than eight-to-10 hours for one non-stop dive.

As they couldn’t see anything in the water, they sometimes got lost or entangled. Ben got stuck twice underwater. Maksym had to pull him out of a small hole, somewhere around two kilometres deep inside the cave.

Maksym said he’s very proud of the Navy Seals team they supported. They had done most of the hard work such as constant transporting of food, air tanks, medical equipment, medicine and other supplies. The Navy Seals were disciplined and modest, and kept working tireless without complaint.

Even though they’re not sure whether they could find the children, Maksym was fearless. The biggest difficulty for him was that he couldn’t take any chances. He had no idea whether he was 100m or one kilometre away from the kids. They always wanted to go farther, but they knew at certain times they had to go back before the tank became dangerously low on air. Every dive, they really reached the limits of their supplies and physical endurance.
The Navy Seals team fixed the last 400m of rope lining on July 2. Through the rope, just a few hours later, two English divers found the kids and filmed them alive.

After the children were found, Maksym and Ben stayed outside of the cave as consultants until all of them were evacuated successfully. After two weeks the rescue effort drew to a conclusion for Maksym, “It’s over, and I can sleep normally again.”

Since he flew back to Phuket, over 150 media called him for interviews. He declined politely, “I am an ordinary person living an ordinary life,” he responded.

Now Maksym is quietly building his second boat for Dream Yacht Charter Thailand. He is a gentle reminder of words from another great man.

“The world will not be destroyed by those who do evil, but by those who watch them without doing anything.” – Albert Einstein