PHUKET: A 75-year-old German tourist has been released from hospital after suffering serious wounds to his right leg from what police believe was a bite from “big fish” at Nang Thong Beach, north of Khaolak in Phang Nga province on Sunday (Jan 12).

tourismmarineSafetypoliceanimals
By The Phuket News 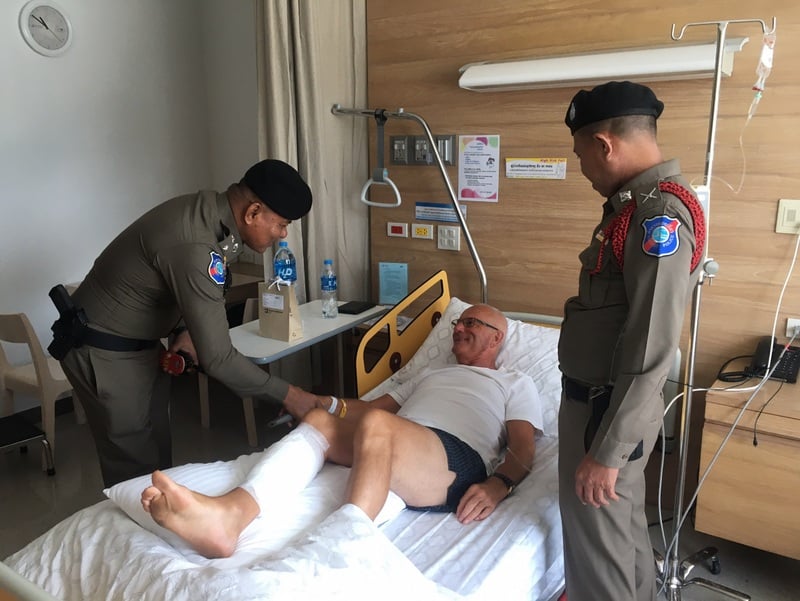 “Mr Malten said that he and his wife went for a morning walk along the beach on Sunday morning. At about 7:15am, Mr Malten went for a swim while his wife stayed on the beach,” Maj Ekkachai explained.

“While he was swimming about six to seven metres from the beach, he felt that there was a big fish swimming nearby and then he was bitten on his right leg,” he added.

Mr Malten called his wife for help, and she helped him back to the beach and informed staff at the hotel where they were staying. The hotel staff then called 1669 for an ambulance, Maj Ekkachai said.

Mr Malten was rushed to Andaman Hub Medical Center in Khaolak, then transferred to Bangkok Hospital Phuket later on Sunday, he added.

“The wound was not inflamed, so he was discharged from the hospital,” he said.

Maj Ekkachai made no guesses as to what had bitten Mr Malten, and did not explain any measures to prevent other tourists from being bitten.

However, marine species expert Dr Thon Thamrongnawasawat posted online that the bite may have been by a bull shark confused by the turbidity of the water where Mr Malten was swimming.

Dr Thon also noted that shark attacks in Thailand were incredibly rare, saying that it had been more than 50 years since a person was reported as being bitten by a shark in Thailand.

In Phuket in 2015 there was much conjecture about whether or not Australian tourist Jane Neame, 37, was bitten by a shark at Karon Beach in August that year. (See story here.)

Experts told Nisit Jansomwong, the Governor of Phuket at that time, that they were almost certain a bull shark was responsible for the attack (See story here.)

An extensive hunt for the suspected shark was launched, but no such shark was ever found.