PHUKET: The quietly-under-construction “Central Patong” shopping mall in the heart of Phuket’s busiest tourism town is slated to be complete by year’s end with hopes that the new mall will be open in time for the new year, a source has told The Phuket News.

patongconstructioneconomicstourism
By The Phuket News 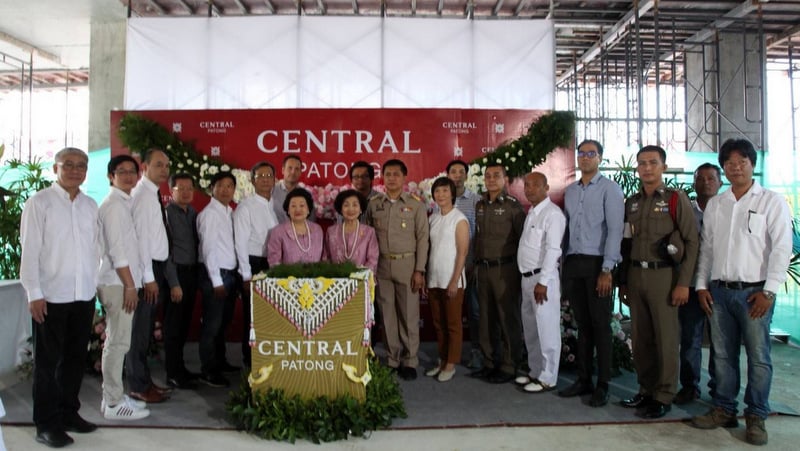 Mukda Chirathivat Uawattanakul and Rattana Chirathivat Norapatlop of the Central Group conglomerate’s Chirathivat founding family were in Phuket last Friday (June 29) for the foundation stone ceremony at the site.

Among the other guests present were Kathu District Chief Somprach Prabsongkram and high-ranking police.

No details of the Central Patong project have been released to the public so far by the Central Group other than being mentioned by Central Group Executive Chairman and CEO Tos Chirathivat in March this year as among the projects slated to “open” this year.

However, construction of Central Patong, located on five rai directly across from the Jungceylon mall (see map below), remains underway.

A source told The Phuket News this morning (July 4) that Central took over construction at the site “about early June” and that Central Patong will open “about the end of this year”.

However, the source was unable to confirm the cost of the project.

In announcing the Group’s strategy for 2015, Mr Tos in March said that in 2018 Central Group would fully implement its strategy to become “New Central, New E-conomy” to make Central Group a “best in class Tech company and a leader in Digi-Lifestyle Platform”.

“The company will continue growth in every direction as in previous successful years,” he said.

“The company will develop its new business model to meet every customer demand, with plans to open new shopping malls and hotels,” said the release in March. Among the projects named were “Central Phuket 2 + Triphum Attraction” slated to open in Q3 this year and “Zen Patong, Phuket” slated to open in Q4 2018.

“An additional 459 new stores will be opened in Thailand and Vietnam throughout the year,” Central announced.

The Central Phuket project, originally slated for completion by Dec 2017 (see story here), is touted as having the largest sales space (leasable area) in Southern Thailand of 185,000 square meters.

It will become home to more than 700 stores, including Central Food Hall, Tops market, Power Buy, SuperSports, B2S, OfficeMate, SFX Cinema and “Aquaria”, the largest underwater world in Thailand and the largest ‘Aquascape’ in Thailand.