PHUKET: A task force of 300 law-enforcement officers under order by Prime Minister Gen Prayut Chan-o-cha specifically targeted and arrested 28 illegal jet-ski operators at Patong as part of an anti-crime campaign that has set its sights on criminal activities being “overlooked” by local officials. 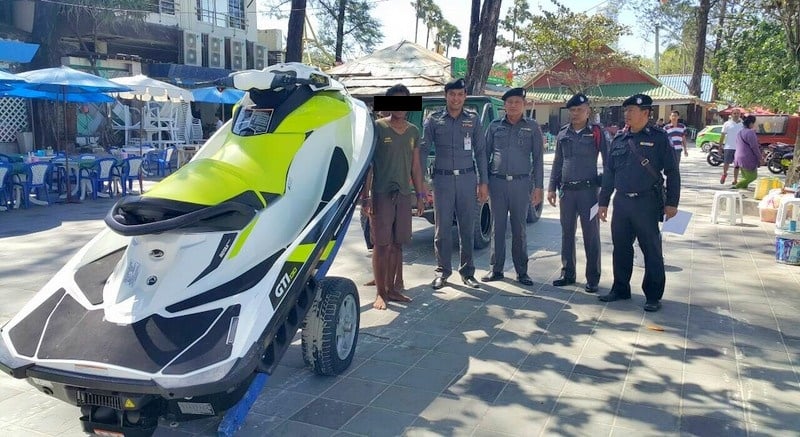 Phuket Marine Chief Phuripat Theerakulpisut, whose office was left in the dark about the raid, this week was transferred out of Phuket (see story here), but the jet-ski operators will face only fines of B500 to B1,000, with only one operator facing a fine of B5,000.

Pol Col Archayon Kraithong, a national-level Deputy Commander of the Tourist Police, told The Phuket News that the jet-ski operators

arrested were only one group of at least 60 targets singled out for takedown in a campaign that aims to curtail the illegal antics of any people involved in anything from land encroachment to drugs and weapons to being “influential persons”.

However, Patong was the only beach in Phuket targeted for jet-skis, no other beaches are on their list – for now, Col Archayon said.

“We have lots to do from our list,” he said. “We have our orders from Prime Minister Prayut Chan-o-cha and we are starting with special criminal cases that local officials have ‘overlooked’.”

Col Archyron added that the task force has set up a special centre at the Phuket Tourist Police headquarters in Phuket Town.

“We welcome people to inform us there of any suspected illegal activities. It would be nice to get more information, direct,” he said.

Phuket Marine Police Chief Lt Col Panya Chaichana explained that all 28 jet-ski operators arrested, and who had their 87 jet-skis seized, are to be fined only for “technicalities”.

Other than fines, the illegal operators will face no further legal action, he added. “But if they are caught breaking the law again, we will fine them again,” he said.

The “catch-and-release” policy comes despite the repeated pledge by Marine 5 Chief Phuripat that any jet-ski operators found guilty of illegalities or severe breach of safety regulations would be banned from renting jet-skis to tourists at Phuket’s beaches.

Mr Phuripat, who for years has allowed rental jet-ski operators to work on the beaches, this week declined to comment what action his office will take against the illegal operators arrested in this latest blitz.

“Go ask the policemen who arrested them,” he said.

“But the 28 cases will be reported to the Governor, so their cases are not concluded for now,” he added.

Mr Phuripat, however, from February 25 is no longer be the Marine Office Region 5 Chief.

“I will move to Marine Office Region 2 in Nonthaburi, where I will take up the same position… At this stage, I do not know who will replace me,” he said.