Blazing Saddles: Wheel around to the Coffee Cycle

Blazing Saddles: Wheel around to the Coffee Cycle

Sitting in the lovely little cafe called Coffee Cycle, in the strangely-named Click Plaza, just off the Chalong Pier Road, as I am right now while writing this, you could be forgiven for thinking youŌĆÖd found the perfect cyclistsŌĆÖ breakfasting spot in all of Phuket. 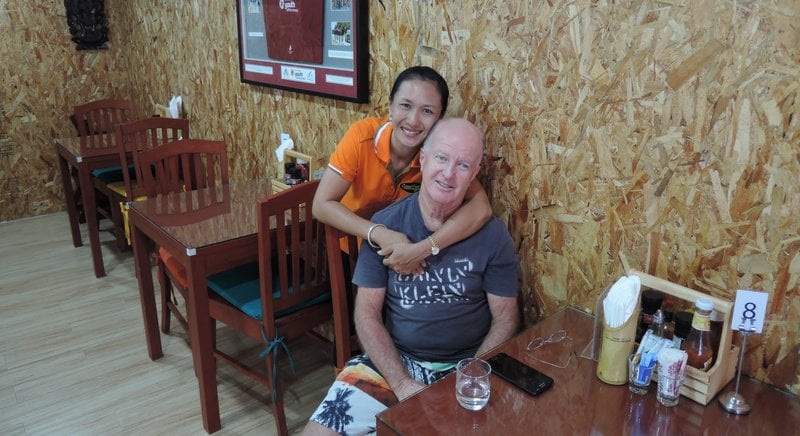 The mural out the front of Coffe Cycle in Chalong. Baz sits down to a hearty post-ride breakfast. Eating is a close and necessary bedfellow of regular cycling and many of the health benefits of pedal-pushing are derived from the sociability and companionship of your passion for the sport with like-minded, Lycra-clad, souls, and where better to do that than in a convivial cafe over a well-earned hearty breakfast?

You can’t fail to recognise Coffee Cycle as you turn into the broad swathe of Click Plaza with its bars and shop-houses, as it has an array of bike racks out front and a large tromp l’oeil mural painted on the wall outside, portraying palm fronds over a dreamy beach scene.

A beguiling outdoor patio with huge TV screens welcomes you, which when I arrived were showing, appropriately enough, a vertiginous hill climb from the Tour de France. Alternatively, you can choose to sit inside in the air-conditioning and gaze out at the quiet little plaza and its scratching soi dogs.

Coffee Cycle is the brainchild (or possibly branchild) of Baron Dinte and his friendly Thai partner Saranya “Wa” Sukhom who runs the cafe and welcomes you when you arrive. They saw the niche for a cycling-orientated cafe in southern Phuket and given their passion for the sport, decided to launch Coffee Cycle targeted at fellow cyclists and those who just enjoy great food in a convivial setting.

Baron is a remarkably strong and accomplished Aussie cyclist, now 66 years young, who grew up on beautiful Bribie Island just north of Brisbane off the Queensland coast. The son of a fisherman, it is perhaps no coincidence that Baron has chosen another island (almost) called Phuket upon which to settle for his golden cycling years!

Like many Aussies, Baron was an active sportsman for most of his life, but only took up dedicated cycling after the age of 48. Then, when aged 55, he undertook his first Sydney to Gold Coast group bike ride of over 1,000 kilometres in just seven days, raising funds for several children’s charities while he did so. This has now become almost an annual event for Baron who has completed eight such rides, raising over $15,000 for charity, and hopes to complete ten of them before he turns 70!

He has also completed five annual Around-the-Bay events in Melbourne raising funds for the Smith Family charity, and on the wall of Coffee Cycle itself you’ll see an autographed cycling shirt that Baron recently acquired through a bid of $3,400 for Father Chris Riley’s “Youth Off The Streets” charity. Certainly Baron is a man who has turned his passion for pedal-pushing into a wonderful way of supporting worthwhile causes and doing good.

Coffee Cycle opens daily from 7am until 8pm and the menu features such alarmingly healthy pre- or post-ride faire as French toast with berries, mango, or strawberries; fresh seasonal fruit plate with yogurt; various bacon and egg combinations; muesli with fresh seasonal fruits and yogurt; tuna or egg wraps; croissant with scrambled eggs. Personally, I love their ‘healthy breakfast’ option of poached eggs, smoked salmon, whole grain toast and a big crunchy salad… for my money the best post-ride meal in Phuket!

Lunch and supper offer such temptations as chicken salad, super-grill of chicken breast, veggies and poached eggs; burgers; or Asian dishes like tom yum goong, or pad Thai, curries and stir-fry’s. And don’t miss out on their daily fresh-baked selection of cakes and muffins. I can personally vouch for how absolutely wonderful the carrot cake plus their world class coffee is after a bike ride when you know that the slight naughtiness of the cream and icing embellishments are absolutely justified by the ardent pedal-pushing you have just completed!

Baron Dinte is a terrific example of a man who has turned his passion and hobby into a means of doing good, not to mention bringing good nutrition and good times to the cyclists of southern Phuket, Drop by Coffee Cycle and say “hi”, you won’t be disappointed.

“Bicycling” Baz Daniel fell off his first bicycle aged three... a case of love at first slight. Since then he has spent a further 65 years falling on and off bicycles all over the world, but his passion endures. When not in traction, he found time to become Senior VP of the world’s largest advertising and communications group, finally retiring to Phuket in 2006. He has been penning his Blazing Saddles column, chronicling his cycling adventures in Phuket and beyond, since 2013.